When we last dropped in on online SF fashion line Everlane, they had just stepped up from a shoebox on Sutter Street to an 8,000-square-foot Mission District warehouse with soaring ceilings and custom white furniture. That was exactly two years ago, and the brand—which specializes in men’s and women’s basics for the modern minimalist wardrobe—has since outgrown its office and taken over the 5,000-square-foot laundry building next door.

Everlane is all about “radical transparency” in its manufacturing—click on any T-shirt or cardigan and the factory vetting process and real costs are spelled out. The company wanted to apply that same ethos to the new office, which is linked to the spruced up old quarters by a bridge. “To make our new space feel radically open, we knocked down walls and bought 20 gallons of white paint,” they tell us. As soon as the paint dried, we dropped in for a revisit. 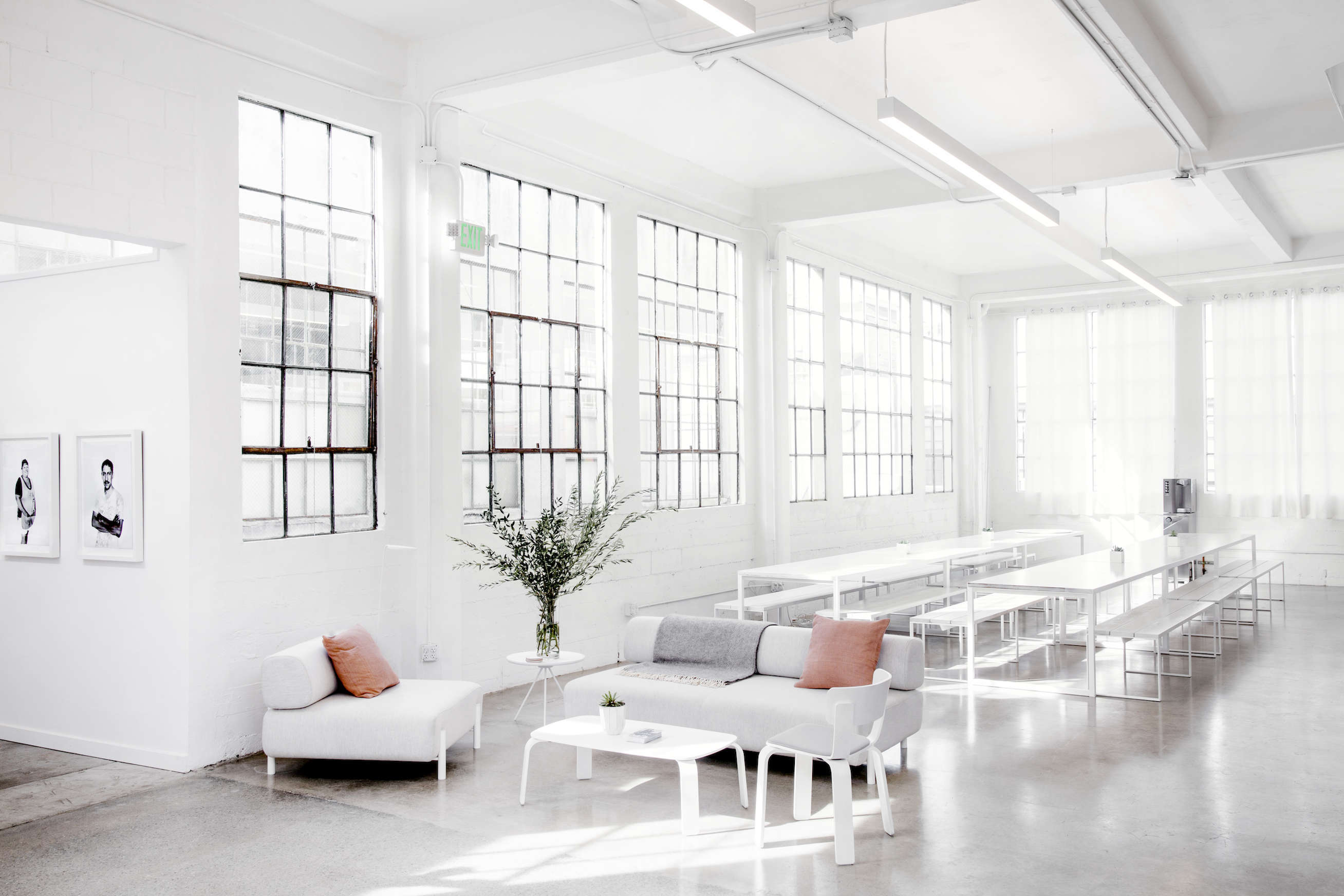 Above: “No conference rooms and no cubicles” has been the rule at Everlane from the get-go in 2010. Its new warehouse space retains its original 1920s towering windows—installed, the story goes, so that laundry workers could check stains on garments. The picnic seating is used as the dining/meeting area, and, like much of the office’s custom furniture, is the work of Ohio Design of SF. 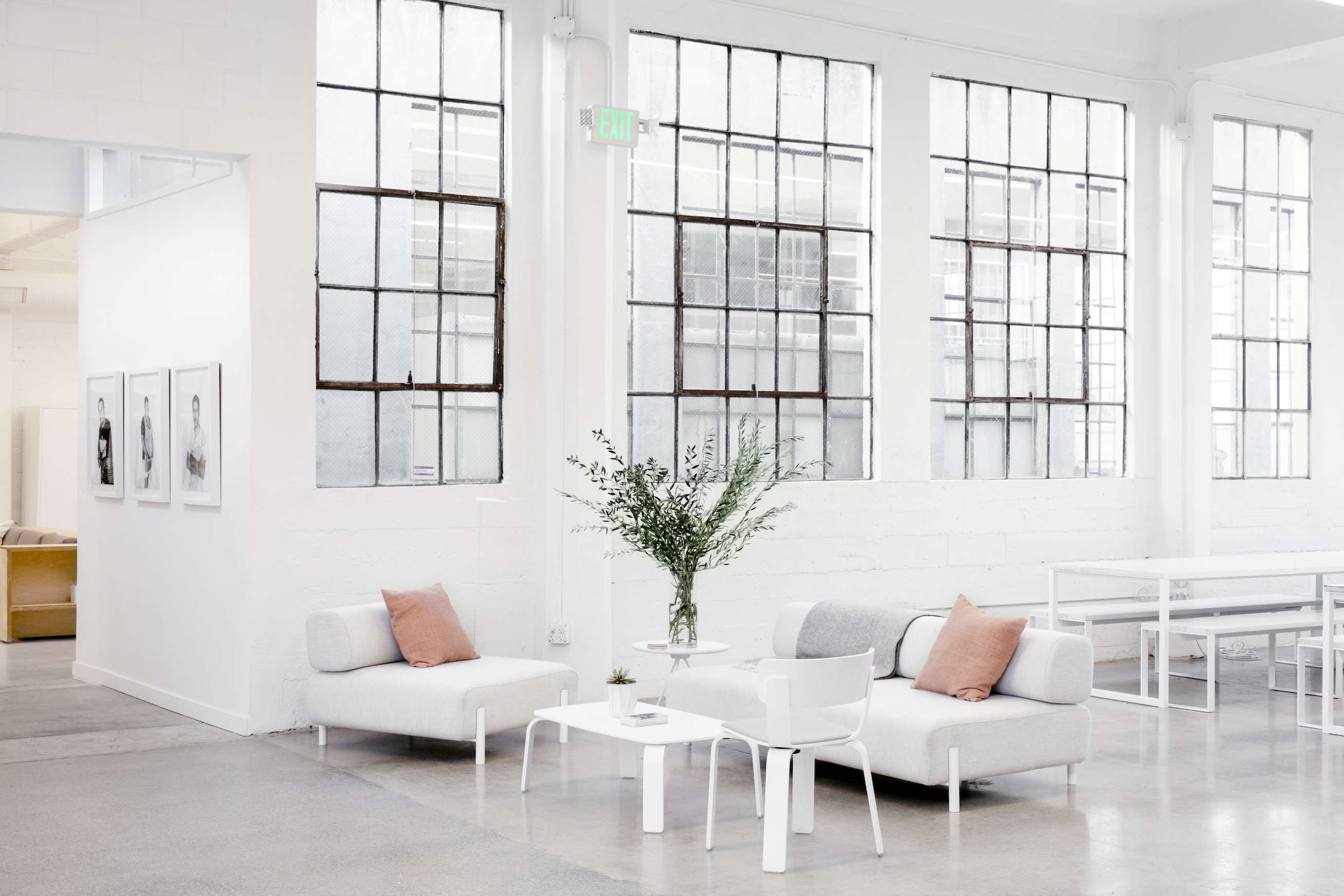 Above: The crisp, understated office design was conceived and directed by an in-house triumvirate: Everlane lead designer Lee Cerré, CEO Michael Preysman, and Kelly McLaughlin, who oversees “people operations.” They adhered to an ethereal palette of white and gray underpinned by hints of pink, black, and natural wood.

A big decision: which shade of white to use? “We went with Chantilly Lace from Benjamin Moore, the worst name for a white that has the most depth and warmth without being ecru or ivory,” says Cerré. The sitting area is furnished with pieces by Hem of Stockholm—including the Palo Two-Seater Sofa, Bento Chair, and Bento Coffee Table. The pillows are West Elm’s hand-loomed Indian silk-and-cotton design in Rosette. 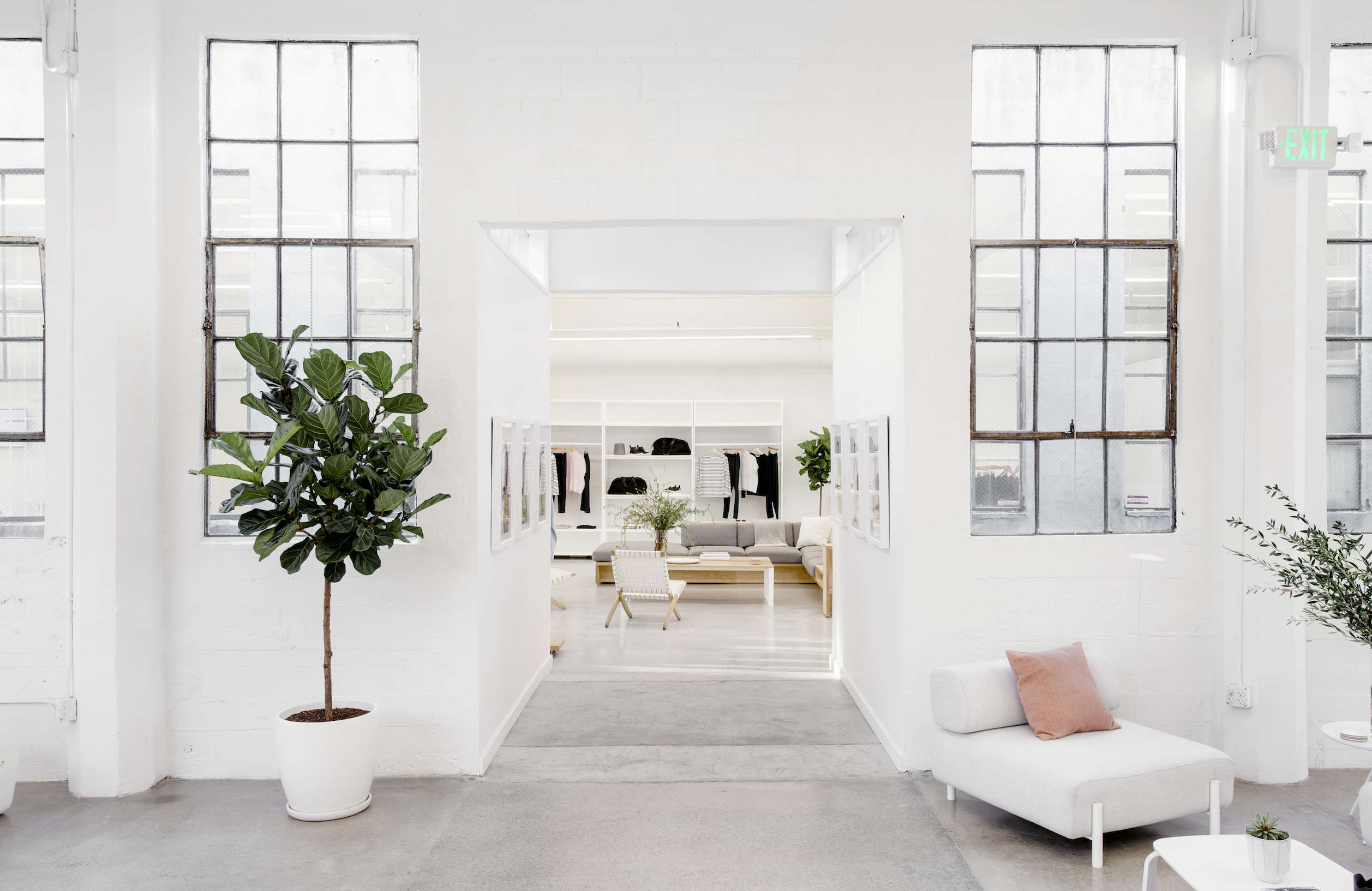 Above: The bridge that connects the two halves of the office is flooded with natural light. 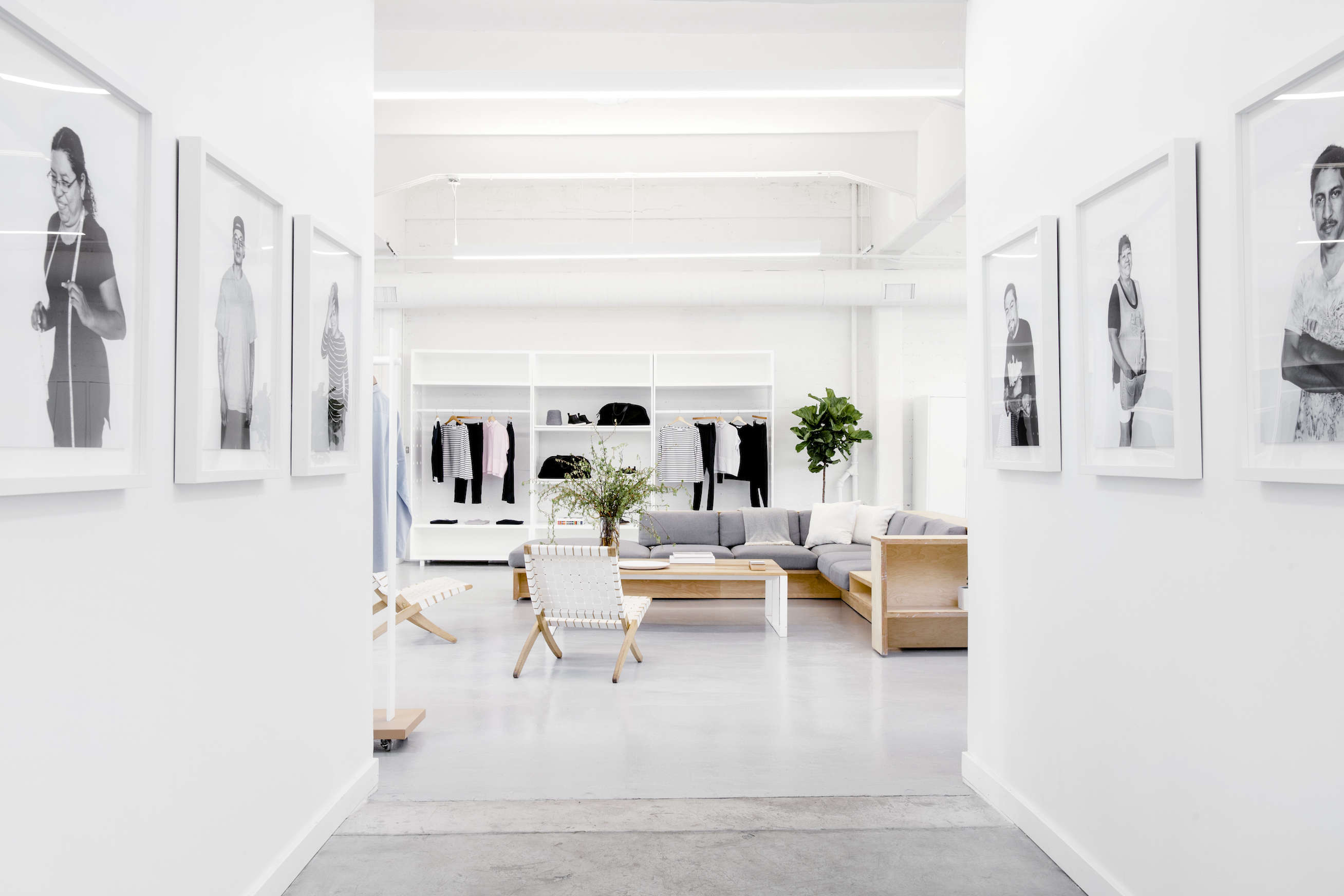 Above: Portraits of workers in Everlane’s Los Angeles T-shirt factory line the bridge. 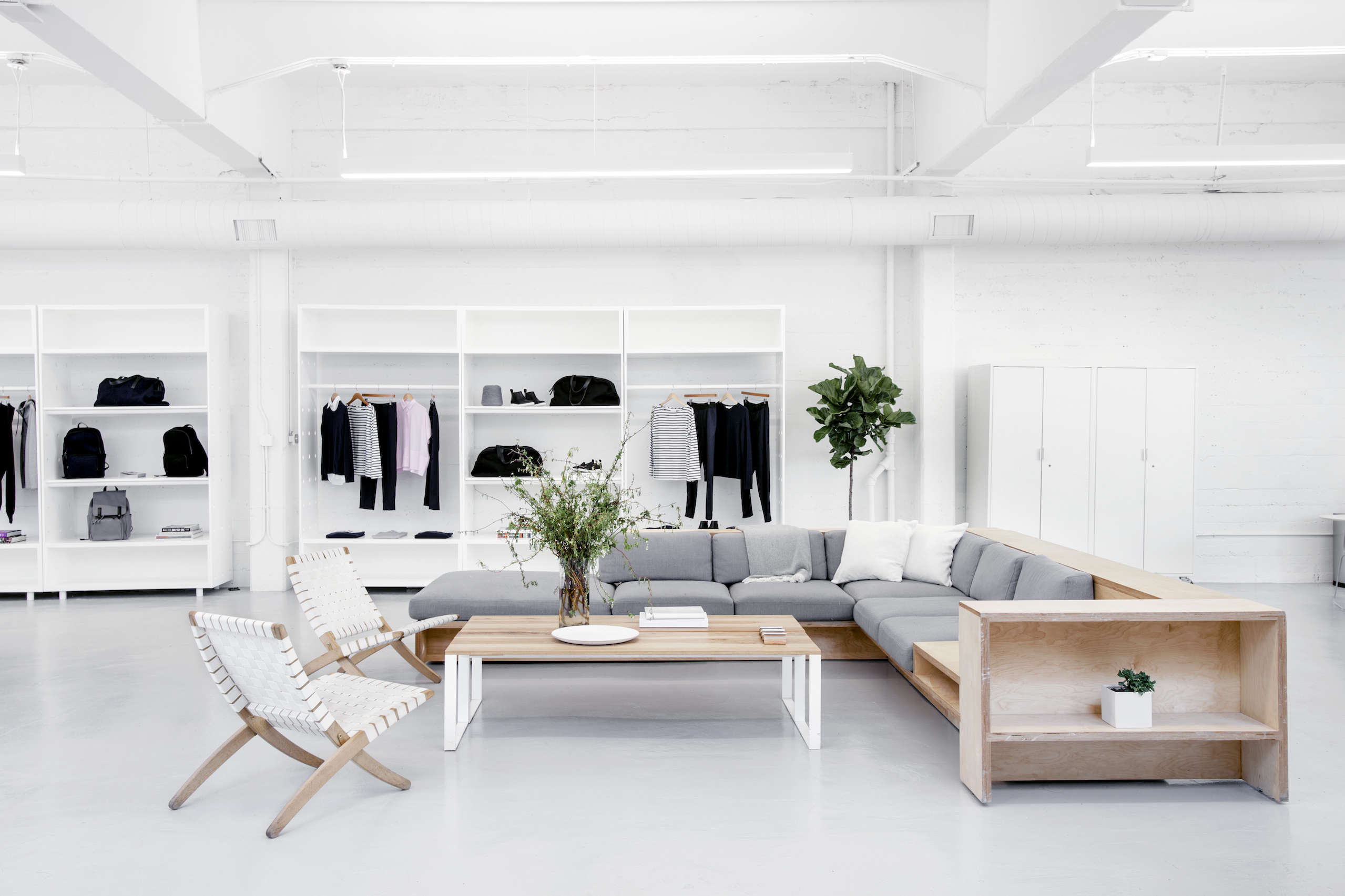 Above: A meeting area in the remodeled existing office—Everlane South—is furnished with a custom banquette and shelves designed by Friends & Family of Brooklyn for Everlane’s model-home pop-up in NYC and repurposed here. 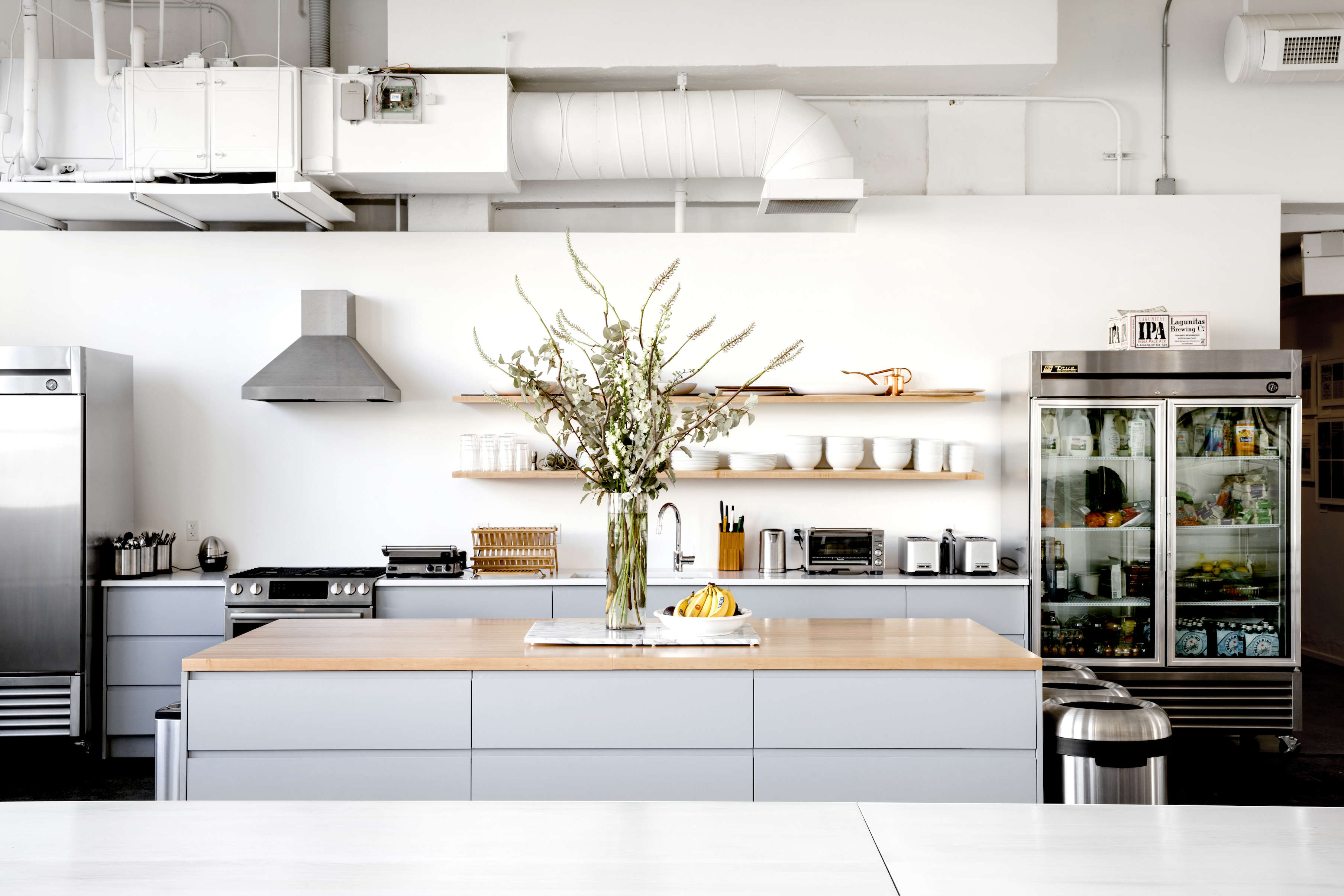 Above: “The intent for the kitchen was to make the design as streamlined as possible, so that a lot of people can use the space,” explains Cerré. Toward that end, the custom cabinets have reveal handles and “can be opened easily even if there’s a crowd around them.”

About half of Everlane’s employees prepare their own lunch at the office—the company has weekly grocery deliveries selected by staff that are stored in two commercial refrigerators by True: The stainless holds meat, cheese, and condiments; the glass-front is for produce and drinks. 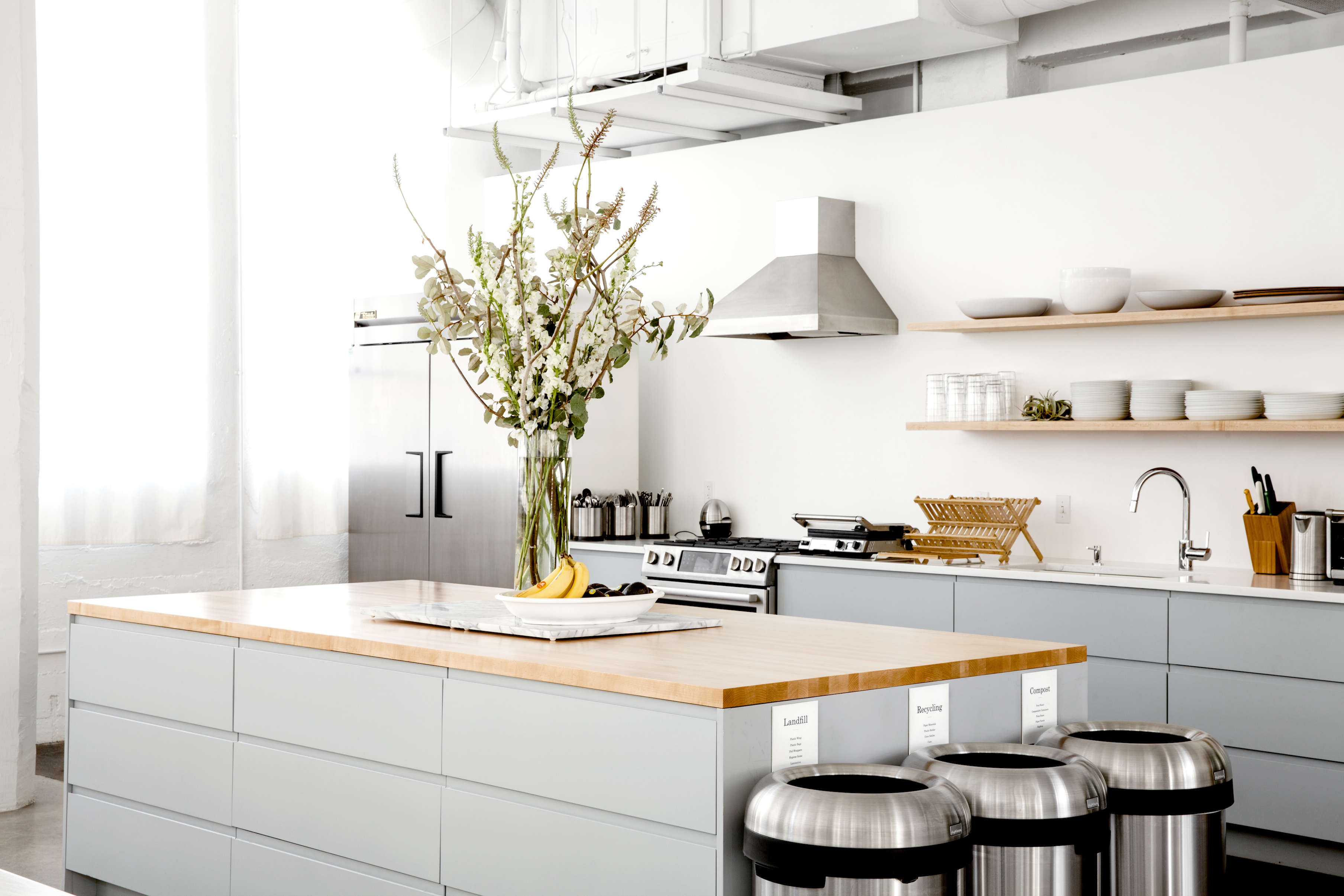 Above: The island has a butcher block top and its drawers and cabinets are loaded with pantry goods.  The stainless garbage bins are Simple Human’s Bullet Open Cans. 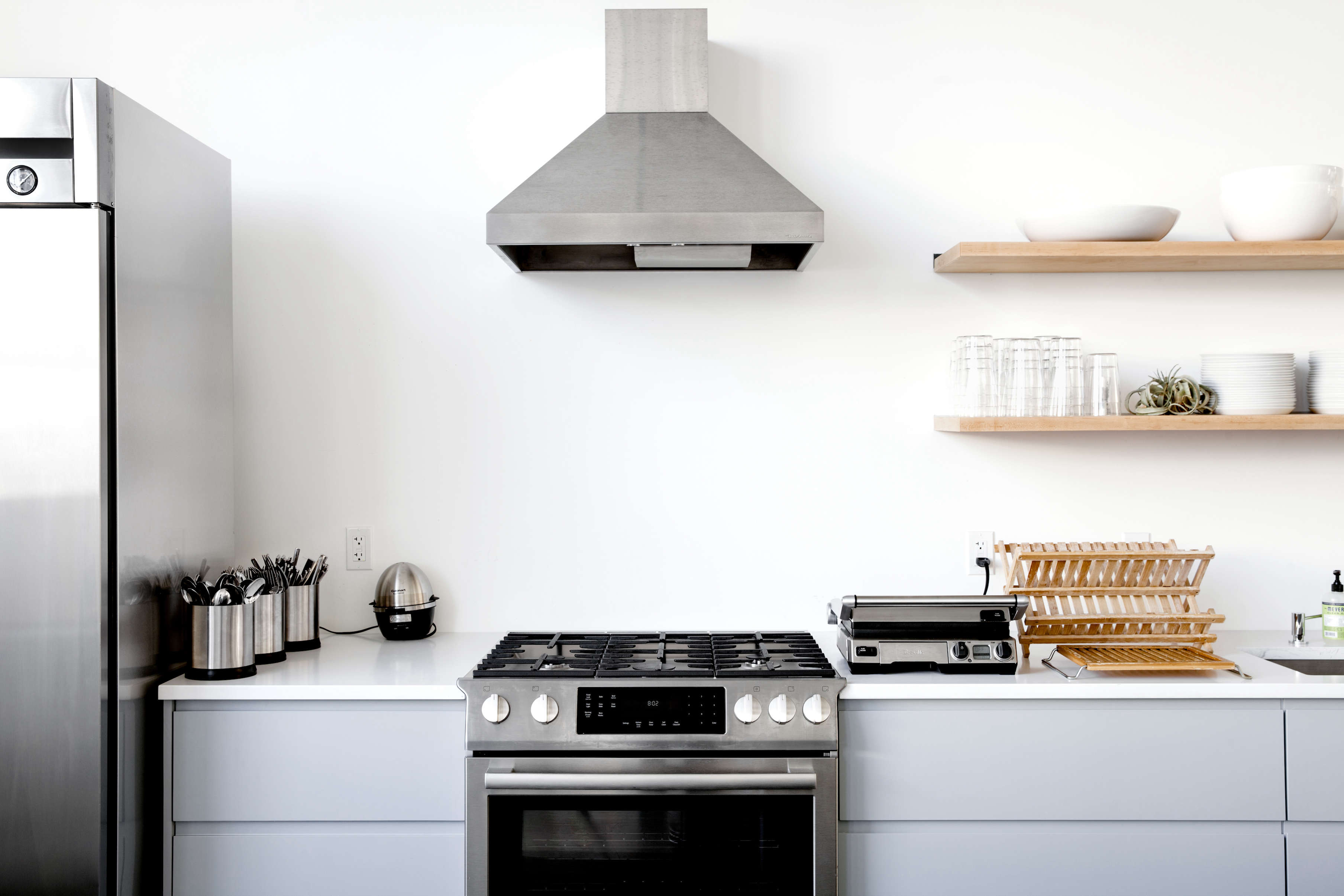 Above: A Bosch range used for dinners and special events is flanked by engineered quartz counters—read about the hardwearing material in Remodeling 101. The hood is from Vent-a-Hood’s Euroline series. 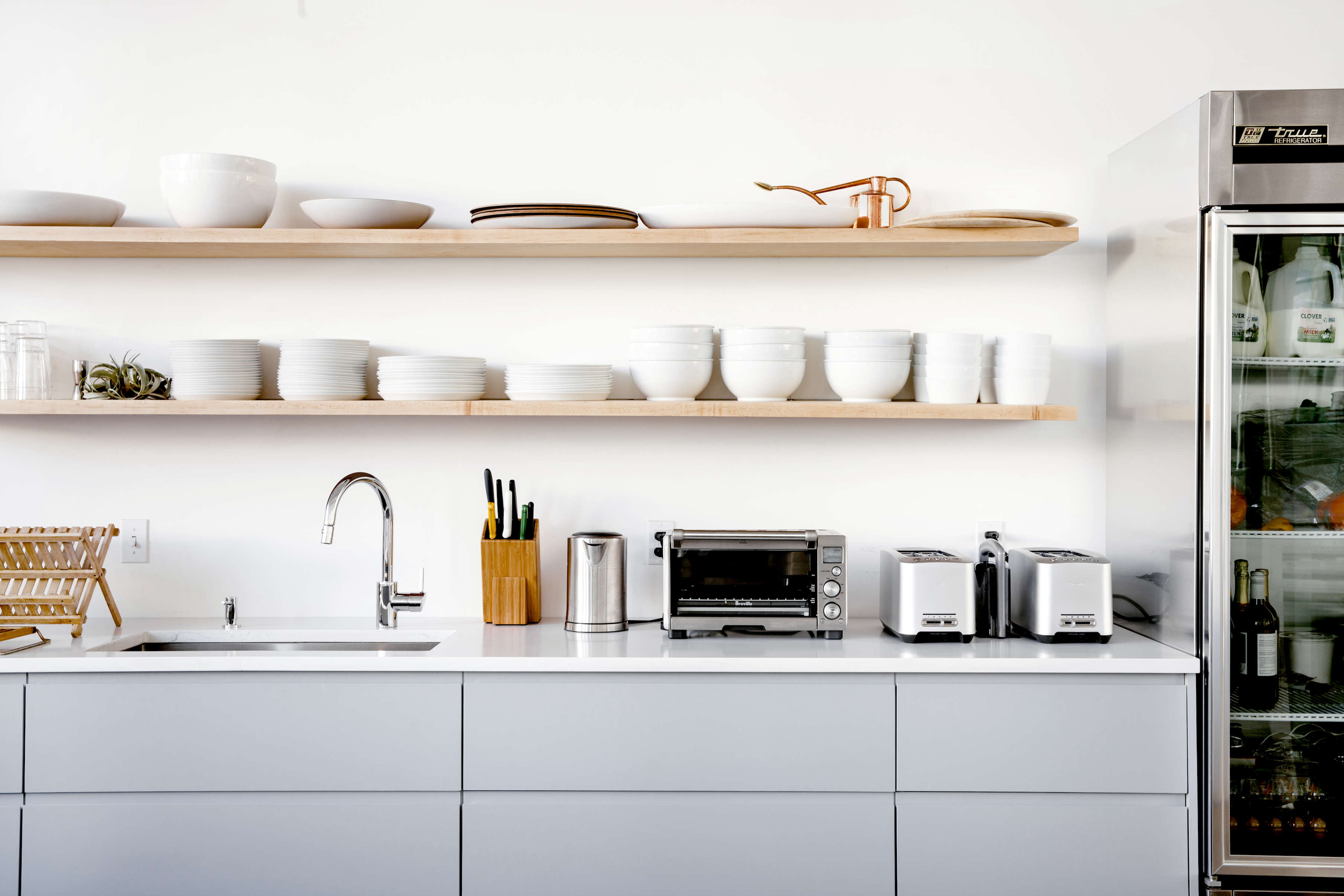 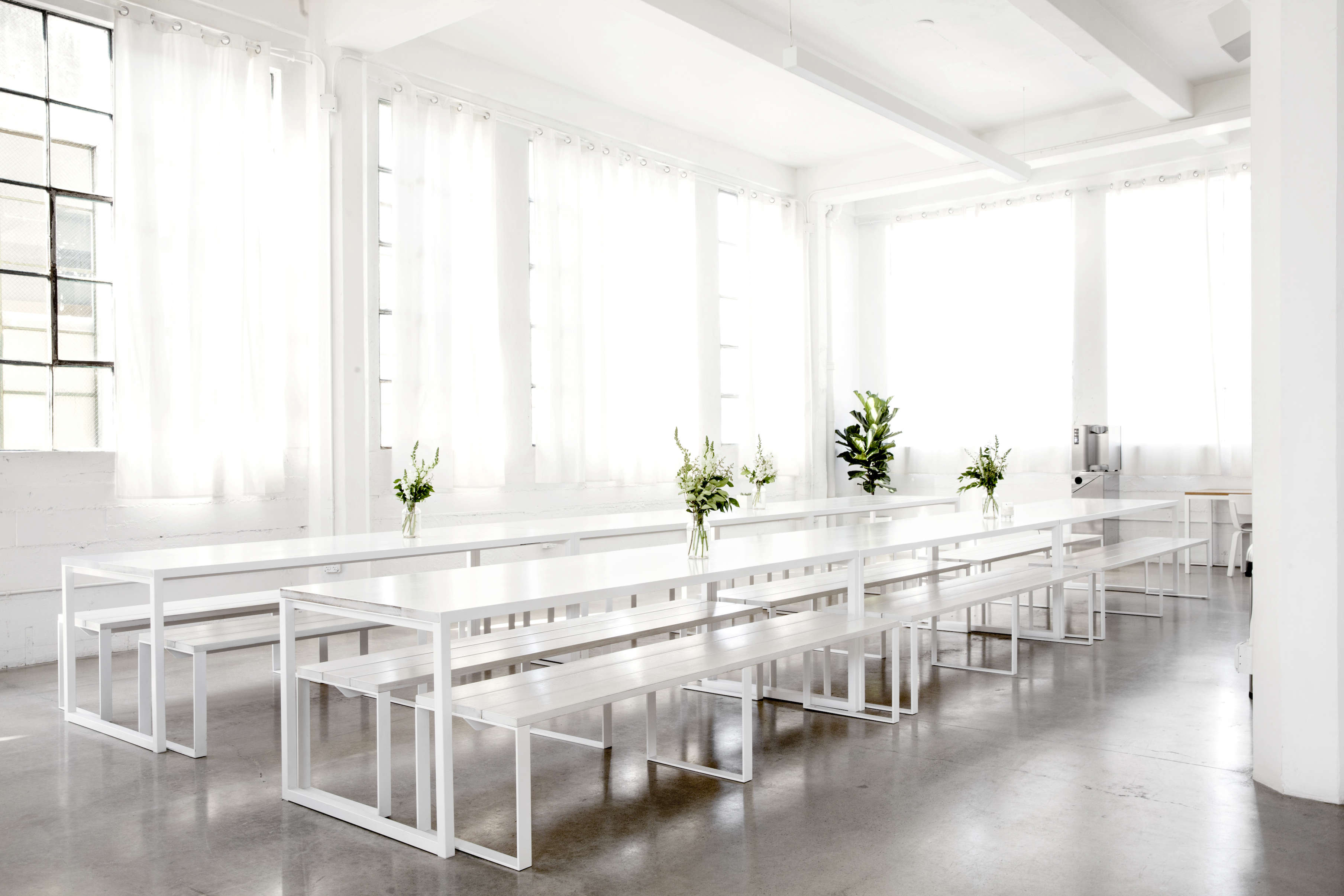 Above: Ohio Design‘s custom tables and benches have metal frames and painted wood tops. During the renovation, the concrete underfloor was exposed and given a light gray stain and polish: “We love the variable texture the floor provides,” says Cerré. “Thanks to it, we don’t have much need for floor coverings.” 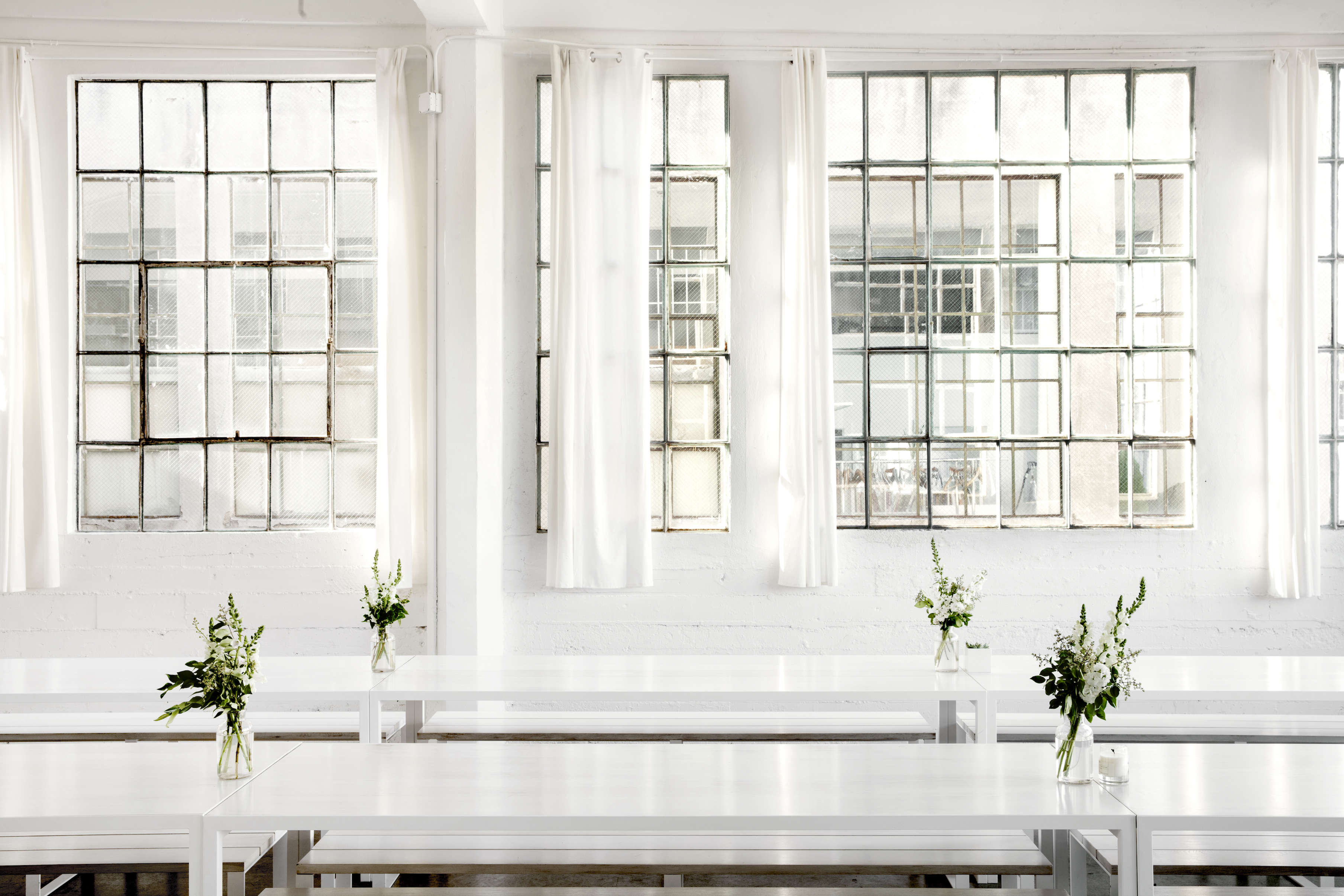 Above: The spring arrangements are the work of Mission District flower shop Ampersand. 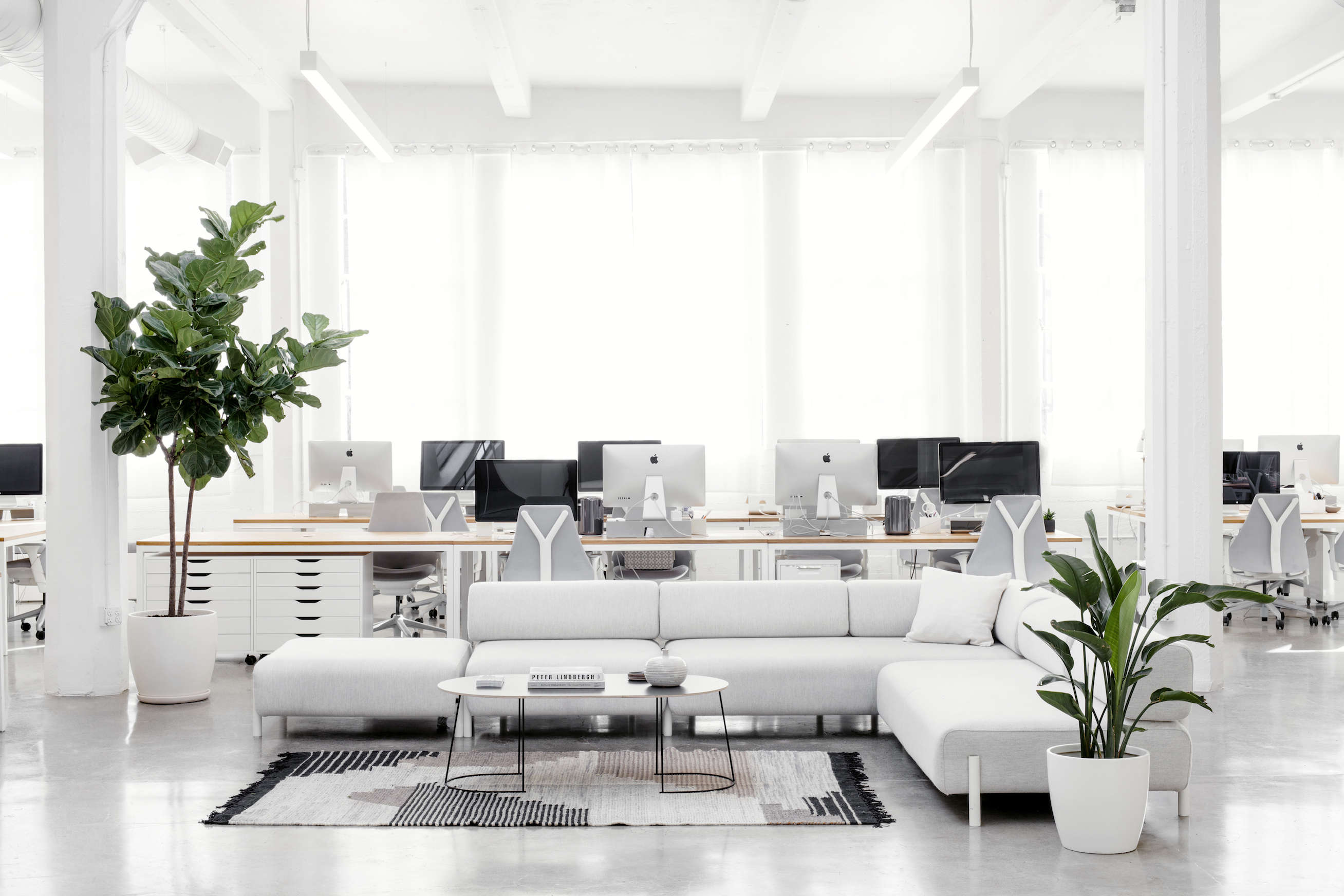 Above: “As you can see, the office is an open floor plan and we wanted it this way to foster an environment of transparency and collaboration,” says Cerré. CEO Preysman sits in here amid the marketing, data, operations, and creative teams. The L-shaped sofa was assembled from Hem’s Palo designs in a wool/poly upholstery. Ohio Design made the custom wood-topped desks; they’re paired with Herman Miller Sayl chairs. 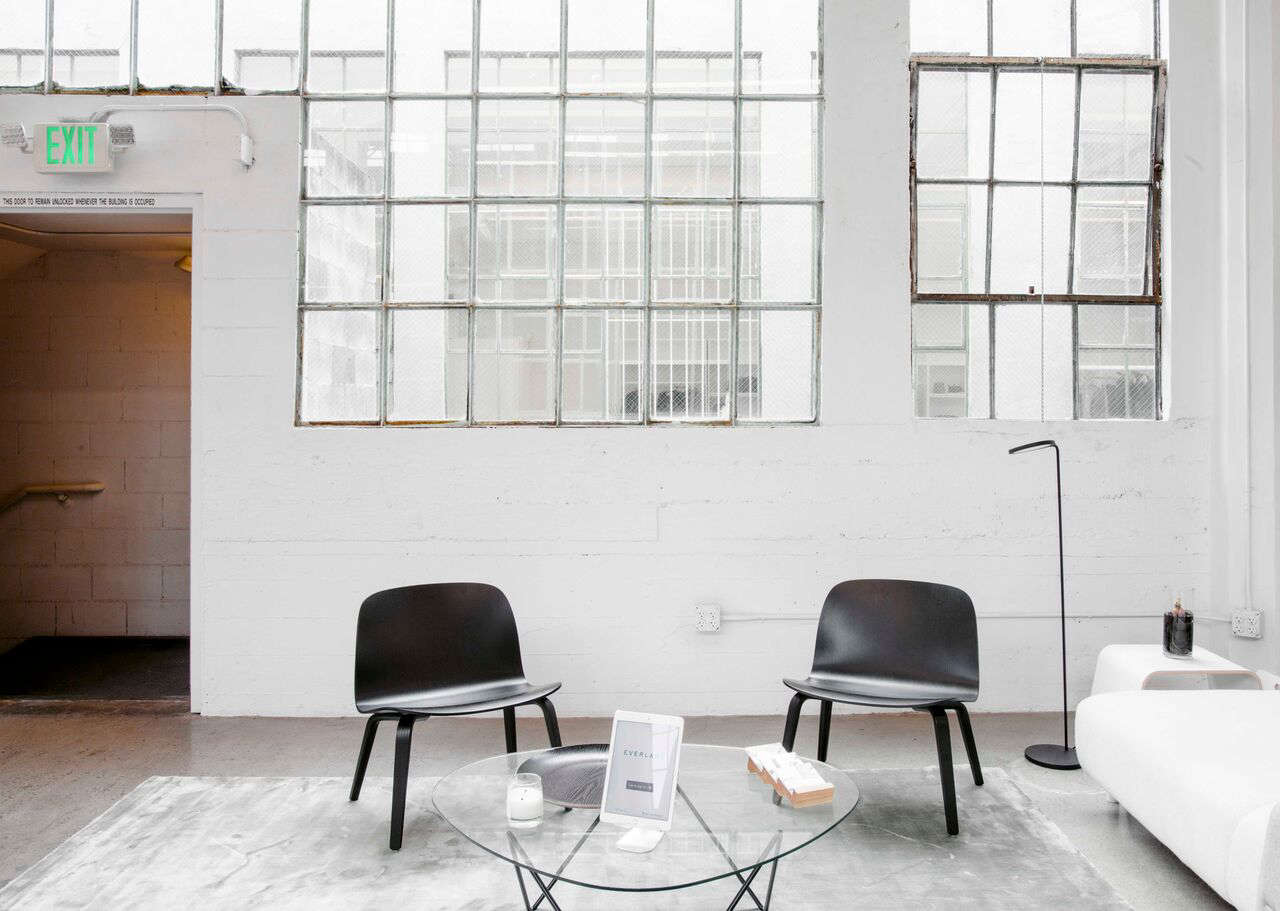 Above: Muuto’s wood Visu Lounges stand ready for tête-à-têtes. Go to Office Visit to see Everlane’s office in its last incarnation, a smaller, more off-the-cuff version of the new design.

For more workplace inspiration, take a look at:

#OrganizedHome editor Christine asked: “What to 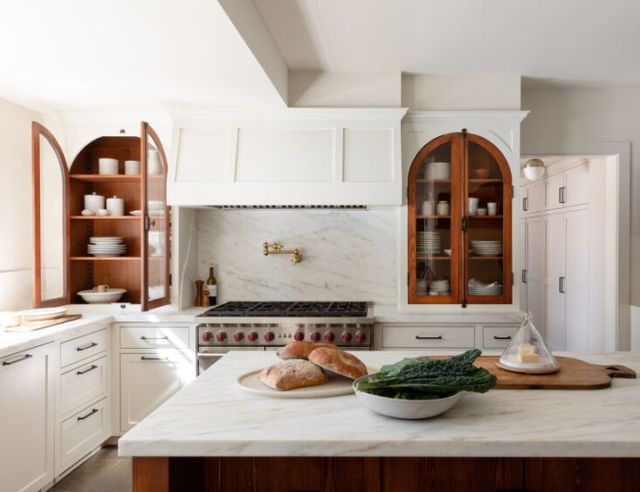 When most of us see a blank wall, our urge is to c 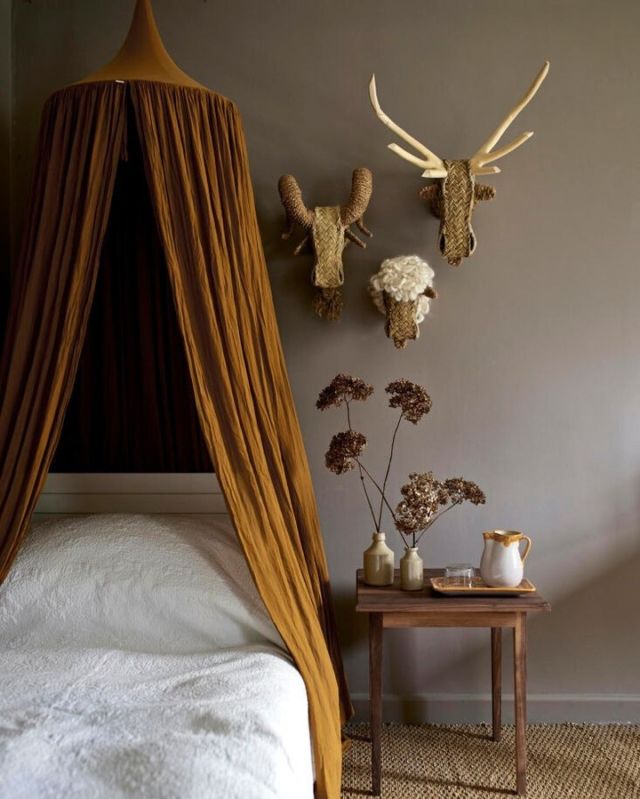 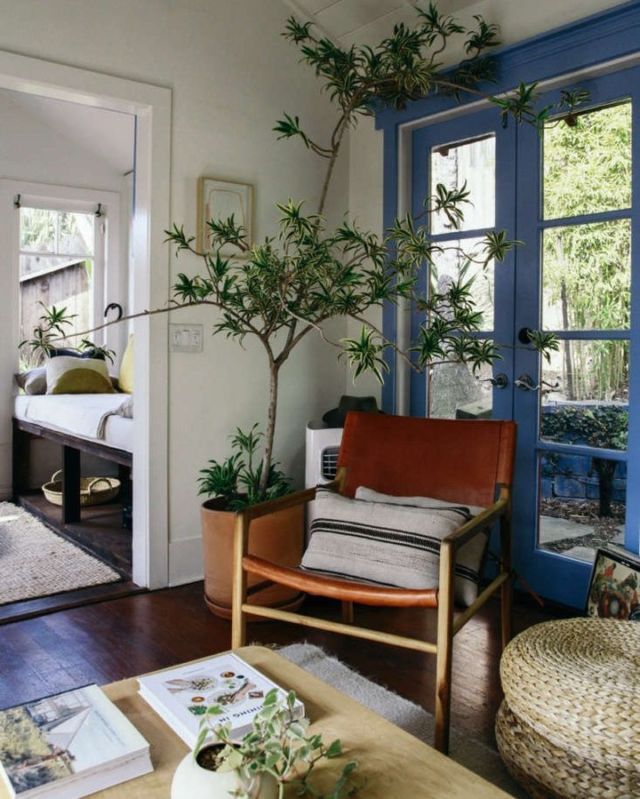